The Fox & Nicholl Team of Four 1928 Lagonda 2-litre Low Chassis Tourers 'PK 9201', 'PK 9202', 'PK 9203' and 'PK 9204' were acquired by Ivan Forshaw between 1948-1961 and subsequently restored by Willie Reeves, George Williams and Simon Spenceley at Aston Service Dorset under the strict watchful eye of Ivan. A considerable amount of thought was put into the four 2 litre cars that were developed for the 1929 racing season. The engines were highly tuned like the previous season but for this season the introduction of a new low chassis was an important development. This was achieved by creating a much greater drop between the stub axle and the spring platforms on the front axle beam; it was also formed in such a manner as to allow the brake perrot shafts to pass through the beam instead of being fitted below it, as on the high chassis cars. At the rear, packing blocks were placed between the top leaf of the rear springs and the axle spring platforms to reduce the height to that of the front. The two main chassis cross members were reduced in depth immediately inboard of the main side members, so that the floor could sit within the side members, and a front cross member, heavily dished in its centre as on the 1928 racing cars, to allow the crankshaft-driven generator to protrude between it and the radiator. The radiator and the bulkhead were lowered some two inches to give a lower body line, the rear of the bodies being cut short and raked to make room for a 25-gallon petrol tank. The tank was pressurised by a hand pump mounted on the left side of the instrument board, obviating the need for a petrol pump. The first outing for the Fox and Nicholl cars was the 1929 Brooklands Double Twelve meeting. In addition to these four cars, the works entered the very fast H/C 2 litre, always assumed to be PK 2339 (but now seemingly fitted with an L/C engine), for Mike Couper to drive. This he did single-handed, winning the 2-litre class prize at an average speed of 66.48 m.p.h. and covering over 1,595 miles during the race. Edmondson and Roberts were second in the class, with Jackson and Broomhall, and King and Wolfe taking third and sixth places respectively. PK 9201, the Rose Richards and Randall car retired on the second day with a broken crankshaft. The second photograph shown was taken alongside the Lagonda pits after winning the Sir Charles Wakefield class prize, Brooklands Double Twelve 1929. Robin Jackson is at the wheel of car number 31 (PK 9204), Broomhall stands behind it, as does Frank King (bald head), whilst Howard Wolfe can be seen at the wheel of the second car from the left, race number 30 (PK 9203), with Tim Rose Richards (without helmet) and Cecil Randall standing behind it. Third from left is PK 9202, race number 25, with Bill Edmondson and George Roberts. Car number 32 is the works entered H/C car, driven single-handed by Mike Couper, seen here with goggles around his neck. Above is the front cover from an original program for the Brooklands Double Twelve. The third photo is the insurance document for the cars, permitting them to race at the Double Twelve. 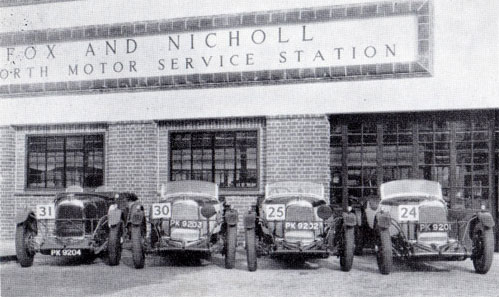 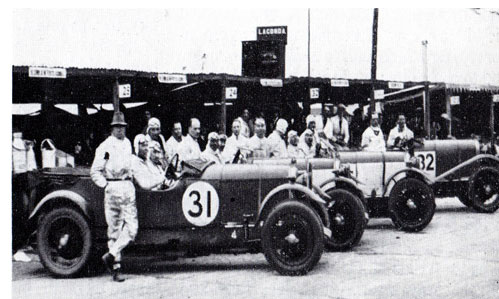 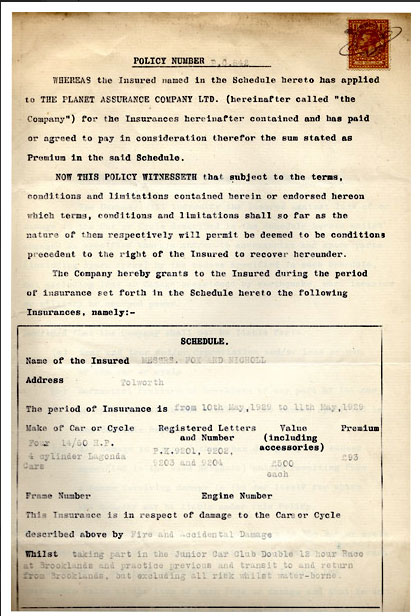 As on the 1928 cars, a scuttle-mounted reserve oil tank was fitted, its tap also mounted within the cockpit. The compression ratio was increased to 7.2:1, the pots enlarged and polished, and twin Zenith 35mm triple diffuser carburettors fitted. A very close ratio OH gearbox was used and an OH rear axle fitted with a special straight bevel crown wheel and pinion, with a ratio of 4.0:1. Special quick-erect hoods and very small cycle type wings were fitted, as was a plain fairing over the front dumb irons. The chassis was also undertrayed, and again additional shock absorbers were fitted. The cars were registered PK 9201, PK 9202, PK 9203 and finished black over cream. PK 9204 differed in some respects, the chassis being extensively drilled, and the body very similar in fact to the 1928 car.

Aero-screens, plus a full width, fold flat, wire mesh were also fitted. This car also appeared from time to time with long wings, which in fact it wears at the moment. The original colour is uncertain, having been reported as black, green and sometimes grey. Though the four cars were prepared at Fox and Nicholl at Tolworth, and were, in fact, registered in Arthur Fox's name, PK 9201 and PK 9202 were owned by a syndicate under the name PERR. Arthur Fox owned PK 9203 and R.R. Jackson PK 9204, the PERR syndicate being Bill Edmondson, Cecil Randall, Arthur Pollard, George Roberts and Tim Rose Richards. Only one Lagonda was entered for Le Mans, 15-16 June 1929. This was Arthur Fox's 2 litre PK 9203, driven for him by Tim Rose Richards and the Hon. Brian Lewis. PK 9203 outside the Fox and Nicholl service station. Unfortunately, the car blew a head gasket and retired after 283 miles. To the right is the original shipping document for PK 9203 to travel from Newhaven to Dieppe on 6th June 1929 for Le Mans at a cost of £22.17s.0d. Above is Arthur Fox's International Traveling Pass again for Le Mans showing the car in cream and black. Despite only one car being entered for Le Mans, eight Lagonda cars were entered for the BARC six-hour race, held at Brooklands on 29 June. These were the four 2 litre team cars and two 3 litre cars, all entered in the name of A.W. Fox, plus a 2 litre privately entered and driven by R.S.S. Hebeler, with Ian Hepburn as co-driver. Bentley won the race as they did at Le Mans but the Lagonda team had nothing to be ashamed about, Hindmarsh winning the 2-litre class, with the 2 litre driven by Rose Richards and Randall a creditable ninth overall at an average speed of 63.98 m.p.h. The Fox team of Rose Richards and Randall, Roberts and Pollard, and Lewis and Jarvis took the 2-litre class prize, the Mobil Oil Cup. The next outing was the Irish GP on the 13th July 1929 at Phoenix Park, Dublin, where three Lagondas were entered, all in the name of A.W. Fox. They were Robin Jackson's 2 litre, Arthur Fox's 2 litre thought to be driven by Euan Rabagliati and a 3-litre driven by John Hindmarsh. Jackson finished ninth overall at an average speed of 67.81 m.p.h. He is seen below in full flight during the course of the race. To the left is a copy of the original program from the Irish International Grand Prix. The left picture below shows the start of the Irish GP. The centre pages of the program above contained a version of the leaderboard in the picture to be filled in by spectators. The 1929 Fox and Nicholl team cars were in fact prototypes of the L/C 2 Litre Speed Model. The above history was extracted from Geoffrey Seaton's book ‘Lagonda - An Illustrated History 1900 - 1950’ and from the original records and comprehensive history file created for the cars by Ivan. 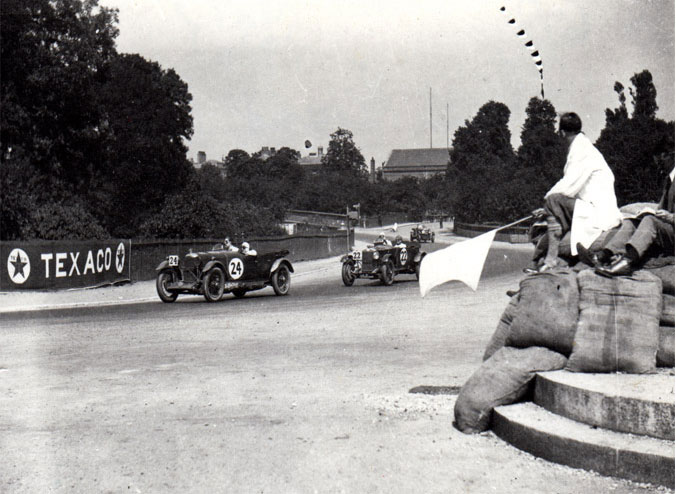 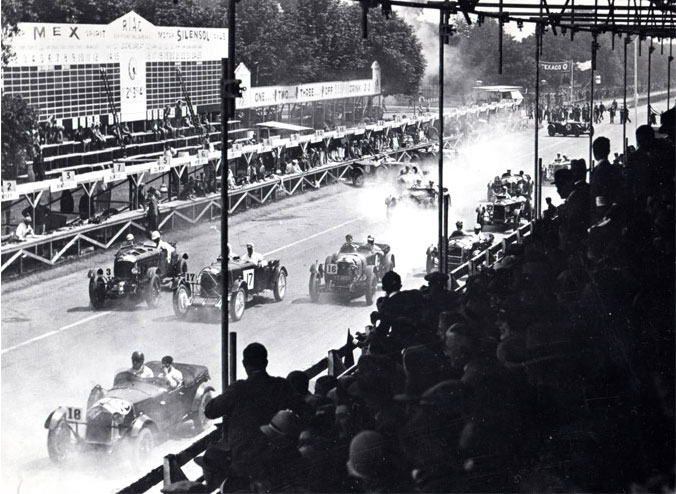 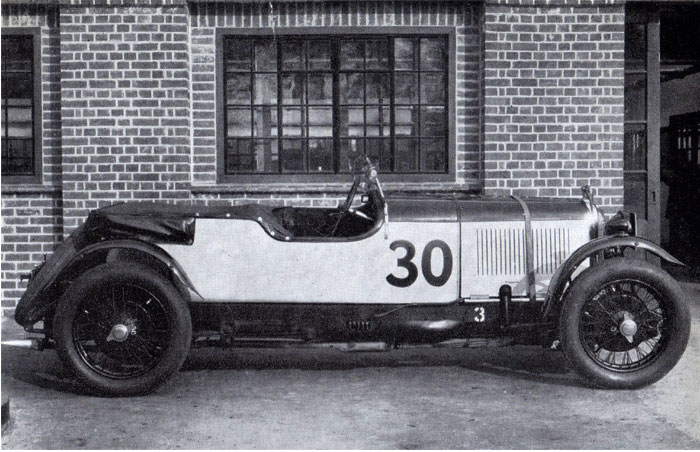